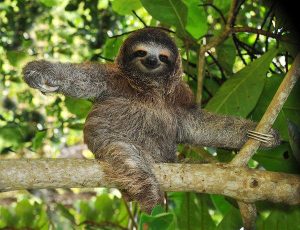 So everyone always says aim for 2lb a week loss, the body isn’t capable of losing much more than that, any more than that will just be water or muscle etc etc. etc.

Not all entirely true lol.

You can burn BUCKET LOADS of fat a week off your body as long as you are in a large enough calorie deficit.

Large people, with lots of weight to lose can always lose bigger amounts quicker than others simply because it’s easier to create a HUGE calorie deficit for them, for example:

So the guy is GOING to lose weight faster, and more of it, than our lady in this example.

And you need to remember this, someone else’s results and weight loss bears NO resemblance to what you are capable of doing, and I don’t just mean in your head, I mean physically as well.

The woman who is 150lb can NOT expect to consistently lose 2lb every single week (after the initial water loss) because she just doesn’t have the calories to play with, so comparing her losses each week to Doris who weighs 200lb is ridiculous.

So as the month draws to a close, and members are going to be publishing their results, some of which are going to be staggering, do NOT focus on THEM (be happy for them please) but instead focus on what did YOU achieve.

Not the weight loss number, but your application and effort.

Did you do the best you could, were you consistent, are there things you want to be better at?

Any loss you achieve, at any point, still moves you further away from the person you do NOT want to be, and that’s a good thing.

I know you want it all shifted yesterday, everyone does, but you HAVE to realise that the slimmer you become, the slower the weight loss will be, it’s FACT, and you can’t do anything about that..

stay focussed, stick to your plan, be consistent in your diet and be patient.

You WILL lose all the weight you want to, if you can do those 3 things. Yes Doris may see bigger losses initially but believe me she too will eventually end up at the ‘slow and boring and frustrating’ stage as well.

SO focus on YOU, your adherence to your plan, not Doris, or her plan, or her results.

You are you, you are doing this FOR YOU, your body is YOURS, you put yourself in this situation, it’s now YOUR JOB to fix it, but that WILL, I GUARANTEE, take longer than you want it to. So be patient but most of all be consistent. It’s going to take time, and slow down loads the closer you get to the end, but it’s worth it trust me.

But it’s the truth X

We use cookies to provide the best experience on our site for you. By continuing you are agreeing to their use. You may change these settings if you wish.Ok